Naffco’s Falcon 8×8 has a cabin and tank made out of fibreglass, and two engines that produce more than 1400 horsepower

Ever fancy riding in a fire engine as a child? A new 8×8 firetruck – the largest in the world – might just reignite your childhood yearnings. The Falcon 8×8 was unveiled at the Dubai Intersec exhibition earlier this week. Looking like it was fresh from the Batcave, it was developed right here in the UAE by Naffco (National Fire Fighting Manufacturing FZCO).

The truck is still in its production phase, but a model rolled out of the Jebel Ali factory to the safety and security exhibition at the World Trade Centre on January 21. Designed to combat airport fires, the Falcon 8×8 has a tank, cabin and body covers made of fiberglass. The fire engine is capable of hauling more than 18,000 litres of water. It is also equipped with DCP extinguishers, which contain ammonium phosphate-based powders that combat ordinary fires or those caused by electrical shortages and flammable liquids.

So what’s under the hood of the largest fire engine in the world? Well, not one but two engines drive this fiberglass mammoth. “Together, the two engines produce some 1400 horsepower, and are capable of carrying the Falcon 8×8 from zero to 80km/h in under 25 seconds,” Ali Al Khatib, a spokesperson for Naffco, says.

While the numbers might not impress a sports car driver, it’s important to remember that the truck weighs well over three dozen tonnes at 54 tonnes. The Falcon 8×8 is built to meet the requirements of fast intervention in case of emergencies and “was built according to international NFPA 414 and ICAO regulations.” 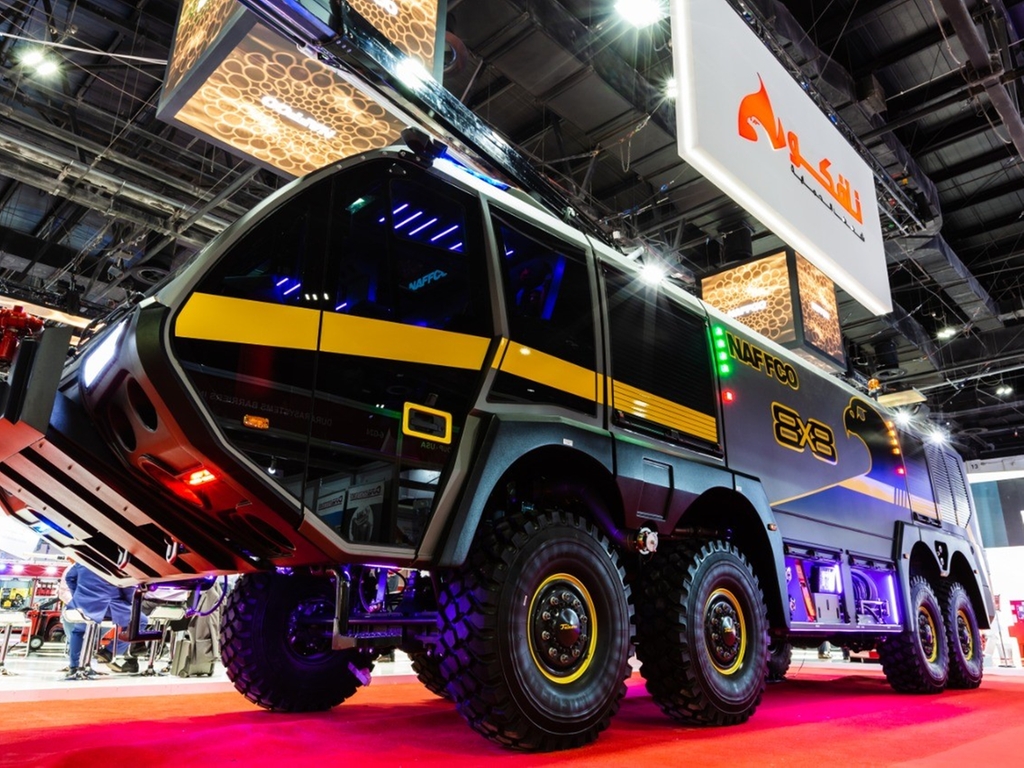 Al Khatib says that since the group was founded in 1991, it has grown to a global network spanning more than 100 countries and now has more than 15,000 employees.

“That includes 2,000 engineers and more than six million square feet of manufacturing facilities,” Al Khatib says. “We have become the world’s leading producer and supplier of life safety solutions. We’ve done so by offering complete solutions for all types of high quality firefighting equipment under one roof. From fire protection systems, fire alarms to custom-made vehicles such as mobile hospitals, ambulances and fire trucks.”